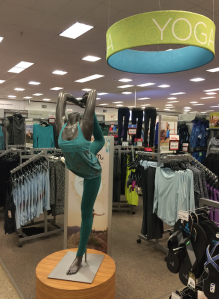 Ixnay on the Hombre: This display says men need not apply

I was strolling in a sporting goods store this weekend with my wife as she was looking for new running shoes. We were in the women’s section of the store, and there was a huge display that said YOGA. There was a life sized female mannequin doing Natarajasana (see above) wearing the “sweats du moment” that the yoga fashion companies are dishing out. I was surprised how vast the area was, when a scant 10 years ago there were no yoga parts of any sporting goods store. This seemed auspicious as Yoga seems to be more prevalent in modern culture. Then, I noticed a very disturbing detail. Amid the yoga sports bras and the yoga stretch pants there was no apparel to be found for men who do yoga.

If you read my blog regularly, you know my disdain for the “yoga inspired” fashion industry. This  post is not about that. It is the fact that men are not even invited into the conversation of yoga in subtle ways (like not offering men’s yoga clothing). At the same store a few months back, I asked the clerk if there were any men’s yoga shorts. He pretty much laughed out loud and was looking around to see if my buddies had put me up for some sort of prank. “Yoga shorts for men?!” he said, “We have plenty of Yoga shorts for women…ha ha ha.”

Yoga is commercialized almost to death in the West. The Yoga fashion industry and fly by night teacher training studios have diluted the practice into the most easily pre-packaged form for the masses. Like Ballet, Yoga has been lumped into the “female only” category by mainstream Western Yoga even though in reality some of the best practitioners in either discipline happen to be male. It is almost a cliche joke to have a man walk into a mostly-female boutique studio. It is very much viewed like the wolf who wandered into the hen house. This video circulating around Buzzfeed which shows men’s first experience in a Yoga class is actually closer to the truth than a funny skit.

As I have stated before, the past umpteen covers of Yoga Journal feature lithe, petite women who are barely of age doing complex Yoga poses. In the month after his death, Yoga Journal didn’t even mention B.K.S Iyengar on the cover. In fact the last man I remember seeing on the cover was Richard Freeman about 10 years ago. Of course in modern times, a cover featuring a middle aged man wouldn’t sell. It seems that Yoga Journal has to have a sensual model on the cover move issues off the shelf because its readers don’t give a rip about the philosophy anymore.

The reality is that men need Yoga. Perhaps even more than women. I have seen men benefit greatly from practice. One of my students is in his 70s. He has the first signs of Parkinson’s disease. The symptoms have made him stiff. He comes to my class regularly and is able to now do Utthita Parsvakonasana better than many of the women in class. He has been coming to my class for about six years and always complains about how hard it is, but keeps coming back. He wears jeans (which is odd in Hawai’i) to class. You would never find him on a Lululemon display case.

The man is a retired chemistry professor. He corrected my teaching one time when I said “the shoulder is in the same line as the hip.” He said “it should be the same plane rather than the same line, because same line can be anywhere.” Since then I have always used the word “plane.”

The above example is why Yoga needs men and why men need Yoga. With all the mumbo jumbo I hear coming out of “woo woo” Yoga classes, we need instructions that are just outside of carpentry school for basic alignment. I don’t care how “spiritual” you are, if your hips are not on the same plane as your ankles in Prasarita Padottanasna, you won’t get your head to the floor unless you have a 5 foot torso and 3 foot legs. 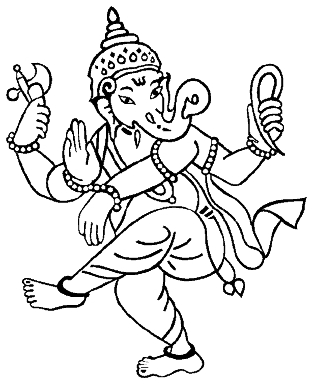